Since Port Royal does not have a CPU test, the main role of the CPU in the test is to compose command lists for the GPU to execute. The task system allows heavy parallel execution. The rendering— including scene update, visibility evaluation and command list building—is done with multiple CPU threads using one thread per available logical CPU core. This shortens the CPU rendering time and reduces the chance of the CPU becoming a bottleneck.

The GPU side of the rendering is composed of multiple rasterization, compute, and ray tracing passes. Some passes run in an asynchronous compute queue.

The engine supports multi-GPU in the form of alternate frame rendering for linked-node setups (homogenous adapters).

The image below shows the high-level construction of a typical frame in the Port Royal benchmark. Tasks are color-coded by work type. Arrows show task relationships. The position of each task indicates the queue in which the task is executed. 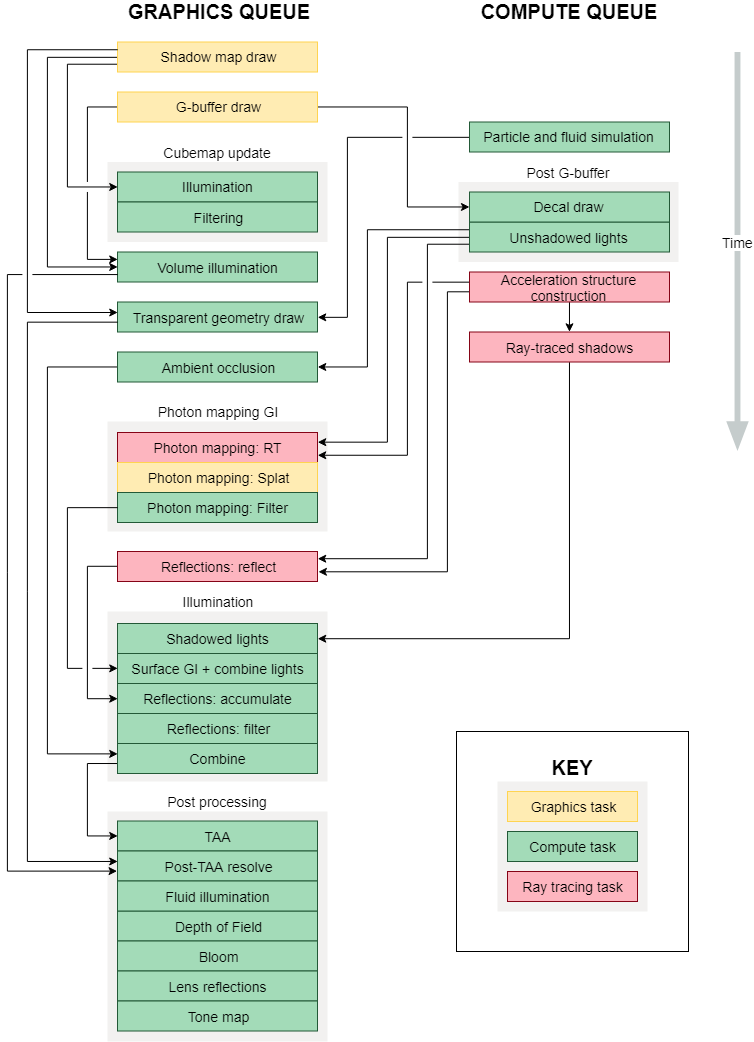 Opaque objects are drawn into the G-buffer in two passes, separating luminous and non-luminous geometries.

The material system uses physically-based materials. The system supports the following material textures: Albedo (RGB) + metalness (A), Normal (RG) + Roughness (B) + Height (A), Luminance, Blend, Opacity, and Light Map. A material might not use all these textures.

Volume illumination is computed using the tessellated light volume approach. The volume mesh of a light is computed by extruding the shadow map of a light, using the tessellation pipeline and adaptation heuristics to reduce the amount of mesh data. The fragment shader then computes the volumetric illumination using additive blending to sum up the airlight integral for the view ray corresponding to the pixel.

This is only used for frustum lights, and each fragment computes its own contribution to the airlight integral numerically to include the influence of the radial mask and attenuation of the light. The algorithm is explained in this paper.

This pass is the only pass that uses tessellation in this benchmark. The normal geometry pipeline does not use tessellation.

Cubemaps are used to cache the radiance for both perspective-correct and traditional specular reflections for static geometries.

Cubemaps include static geometries that are drawn once into a G-buffer. The illumination of the cubes is dynamically updated in a compute pass similar to the normal surface illumination each frame. The lights are queried from the world-space clusters in the illumination pass. The view ray direction is set to the main camera view direction to match the specular highlights to the screen space illumination texture that is also sampled for reflections.

The mip levels of the cube maps are calculated in compute passes by taking the average of each quad in the lower mip. Each cube is halved in this way until the highest possible mip level is computed.

All frustum lights, omni lights, reflection probes, and decals are clustered in the world space to a uniform grid. This is done CPU side and then transferred to the GPU in advance.

We cast rays to the importance sampled direction for each screen space pixel that is over a roughness threshold. The resulting hitpoints (or one if only a single ray is used per pixel) are stored and the results are used to sample reflections from the environment maps. In cases of pixels being non-visible from the cubes or with mirror like surfaces that require pixel-perfect reflections, we compute the reflection separately to render a correct reflection (re-shade). For reflections of glass, we always run the full shading.

The reflect pass uses the ray tracing pipeline to generate a reflection ray for each pixel above a predetermined roughness threshold. The direction is importance sampled according to the same specular BRDF as used in direct illumination. The hit shader writes the ray length, instance ID, primitive index and barycentric coordinates of the hit. The ray generation shader then stores these into textures.

In case the point is not found from any cubes or screen space illumination texture, the instance ID, primitive index and barycentric coordinates stored by the reflection pass are read and used to recompute the radiance for the given ray.

If the roughness of the surface is above a certain threshold, the cube sampling is skipped since the resolution is generally not enough for sharp reflections.

Finally, we execute a spatial-temporal filtering pass for the reflection result and combine it with illumination.

Decals are skewed prisms that are applied on top of the rendered G-buffer using a compute shader in the asynchronous compute queue. Decals are clustered similarly to lights to speed up the apply pass. For each pixel, active decals are fetched from the matching cluster and applied on top of the G-buffer using one of the implemented blending modes. Various modes allow changing different attributes in the G-buffer (such as normal only or all channels).

Ray-traced shadows are implemented in a separate pass running in an async compute queue. For each fragment, there is a shadow ray cast from this fragment in the world space towards the direction of the light source. The any-hit shader is then used to detect whether the ray has been occluded on its way from light towards the fragment.

The output of the ray generation shader is a shadow modulation map, which is a float32 texture filled with values ranging from 0 to 1. The values are generated per-fragment by dividing the energy flux that has reached this fragment by the total energy flux present in the scene (i.e. from all the lights).

One shadow ray is cast from each fragment towards the light source. A post-process filter is not employed for the shadow mask, so the implementation only supports hard-edged shadows.

Particles are rendered as transparent surfaces with approximated visibility.

Fluids are simulated on the GPU using the asynchronous compute queue. The simulation is based on the Position Based Fluids method. Radix sort is used in each step to order the fluid particles using the Z-order curve to achieve locality of memory access when calculating interactions. Additionally, spatial hashing is used to accelerate the neighbor search.

Temporal anti-aliasing (TAA) is applied for the surface illumination texture that already has reflections applied. The projection matrix used for the G-buffer is jittered for each frame so that the sampled subpixel position varies according to a determined pattern. TAA then blends these subpixel-jittered samples together using the exponential average. To fetch a sample from a previous frame, motion vectors written by the G-buffer pass are used. Additionally, variance clipping is used to reduce ghosting.

The effect is computed by scattering the illumination in the out of focus parts of the input image by using multiple passes. First, a compute shader is used to compute confusion radiuses based on depth texture, and splatting primitives are added to a buffer. Then, these primitives are rendered to various resolution textures using the normal rasterization pipeline. Last, the out-of-focus illumination is combined with the original illumination.

Bloom is based on a compute shader FFT that evaluates several effects with one filter kernel. The effects are blur, streaks, anamorphic flare and lenticular halo.

The effect is computed by first applying a filter to the computed illumination in frequency domain like in the bloom effect. The filtered result is then splatted in several scales and intensities on top of the input image using additive blending. The effect is computed in the same resolution as the bloom effect and therefore the forward FFT needs to be performed only once for both effects. The filtering and inverse FFT are performed using the CS and floating point textures.

Tone mapping is executed as the last pass of the rendering pipeline. It applies various two-dimensional camera effects (such as vignette) to the final texture and controls the tone reproduction.

We have implemented a dynamic global illumination solution using real-time photon mapping. This is a multi-pass algorithm with components of rasterization, ray tracing and compute work. The main passes of the algorithm are sample generation from reflective shadow maps, photon tracing, photon splatting and irradiance filtering.